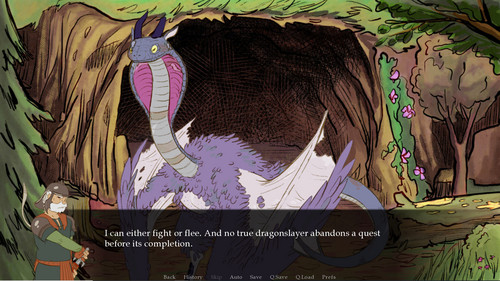 The Dragon's Last Flight is a fantasy visual novel game that was initially conceived as a NaNoRenO project. The player is cast as Marius, a weathered old dragonslayer sent by a strange woman to kill what he suspects to be the last of the dragons. It's up to the player to guide Marius's choices and, in doing so, determine the fate of dragon and dragonslayer alike. I wrote and developed the game, and my good friend Odd Lazdo illustrated it.

Being too large a project to completely finish in just a month, our submission to NaNoRenO turned out to be a free demo for the game, rather than the full release. Here's what we did right--and what we're hoping to do with the rest of the game.

And yet, somehow it all worked out!

What we're still working on

NaNoRenO was fun, but definitely a challenge. While we were able to adapt our strategy and workflow quickly enough to avoid any major issues and meet the end-of-month deadline, our noses would grow long indeed if we said we didn't face our share of struggles.

In short, NaNoRenO 2019 was a blast. A hectic, sometimes stressful, certainly educational, slightly unexpected blast. I learned a lot--not just about how to program with Ren'Py, but about how to write for a visual medium, how to match art and sound to words, and how to set a realistic schedule for myself for future VN projects. Because if there's one other thing I've learned this year, it's that I definitely want to make more visual novels in the future.

Cheers to all our fellow gamedevs and NaNo jammers, and a very warm thank you to everyone supporting The Dragon's Last Flight through their words, videos, shares, and follows. We'd be making this project together even if no one wanted it--but your kindness and generosity has touched us both and given us so much more motivation to keep on keeping on. We only hope our finished game will live up to all of your wonderful expectations!

Get The Dragon's Last Flight

A fantasy visual novel about a dragonslayer hired to kill what may be the last of the dragons.